Where do the members of Wiipurilainen Osakunta (WiO) hang out and what do they do there? On this page, you will find an overview of our events year. International students are also welcome!

Recurring Events Around the Year

Every two or three weeks WiO members gather to discuss and decide on our nation’s matters. These meetings always take place on a Tuesday evening at 7 o’clock. The topics are serious, but the setting is relaxed, with coffee and home-made snacks served by the hostesses. Remember, a student never turns down free food! The meeting is led by the curator, a member of the nation who has already graduated.

The nation’s board meets up before the general meeting to prepare issues for discussion.

Every Wednesday evening at 7 o’clock, coffee and snacks are served at the nation’s headquarters in the Domus Gaudium building in Kamppi. These casual gatherings are a good place to meet people from WiO as well as Kymenlaakson Osakunta (KyO) and Karjalainen Osakunta (KO), two other student nations that reside in the same space.

Free floorball training every Wednesday at 9 pm at Unisport Kumpula. The idea is to have fun and exercise at the same time so don´t worry if you haven´t played for a while or even if you haven´t  tried it at all. You may rent a stick at Unisport for 1 euro.

Events Taking Place Once a Year 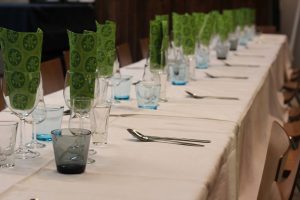 The summer season comes to a stylish end with members of the student nations from Eastern Finland – KO, KyO, WiO, SavO (Savolainen Osakunta) and ÖFN (Östra Finlands Nation) – putting on their formal wear and coming together to celebrate all things Eastern Finland.

In September, the student nations of Domus Gaudium greet the new semester together with a semester opening party. It’s time to kick off the fall season, reunite with old friends after the summer, and meet the new freshmen.

A casual gathering aimed at new WiO members. The freshman fall can get overwhelming with all the new faces and crazy parties. That’s why it’s a good idea to take things a little easier every now and then. As the autumn evenings grow dark, we meet up at a member’s home to sip on red wine, snack on bread, and get to know each other in a laid-back setting. 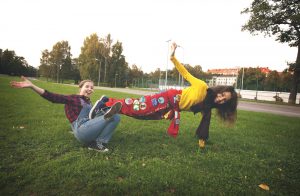 The new members of the nation get to know each other in this playful city orienteering event, typically organized together with the KyO and KO nations. The freshman initiation is a fun way to start your life as a member of the student nation. Dress appropriately for the weather and bring along your adventurous spirit, because you never know what tasks await you.

At the so-called academic dinner parties, or “sitsit”, students gather around a three-course dinner to drink and sing songs. It all sounds very formal, but these events can be very casual. At this dinner party for freshmen, the older members of the nation teach the newbies valuable sitsit skills, like the proper way to toast, as well as extra song verses that can’t be found in the WiO songbook.

This massive freshman orienteering event organized by HYY (The Student Union of the University of Helsinki) is attended by 300 teams. It takes place in the streets of Helsinki, where there are 70 checkpoints to go through. Come conquer the city with your fellow nation members! More information can be found on the HYY homepage.

The nations of Domus Gaudium organize annual get-togethers in the sauna facilities on the top floor of the building.

The new members and older members (or cives) of the nation get together to cook dishes inspired by a specific theme. Examples of previous years’ themes include Mexican, American and Japanese cuisine. This casual get-together is a good place to get familiar with the concept of sitsit and the WiO songbook.

Another playful orienteering event, in which the checkpoints are the facilities of all the different student nations. Like all good things, the orienteering is followed by an after-party, hosted at one of the aforementioned facilities. Where’s Botta? What’s a Vinni? Come along if you want to find out! The event is organized by Osakuntalainen Unioni, an organization that connects the Finnish-speaking student nations of the University of Helsinki.

In this epic marathon of sh*tty cinema, the bravest members of the nation get together and watch films that have the worst ratings on IMDB. Before pressing play, it’s important to prepare a good arsenal of snacks, because without them, nobody can survive this all-nighter of doom.

The female members of the nation put on their cocktail attire, and the male members cook them a three-course dinner and come up with entertainment based around a specific theme, such as “The Love Boat”, “Lapland” or “Space”. 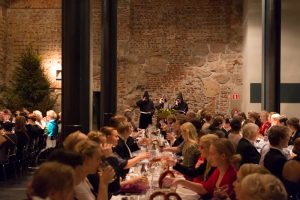 Wiipurin Pamaus, or the Anniversary of the Vyborg Castle Explosion

Wiipurin Pamaus is the absolute highlight of the year, and it’s always celebrated on the 30th of November, regardless of the day of the week. The party commemorates a legendary chapter in the Russo-Swedish War, when Lord Knut Posse blew up the gunpowder store of the Vyborg Castle in 1495. This occasion calls for tuxedos and evening gowns. The evening contains ballroom dancing, a hilarious revue, food, drinks, singing, and an after-party. Before the party itself, there’s a cocktail event; this is where the freshmen are given a sash in the WiO colors, which are red, yellow and blue. This sash is worn to many nation-related events.

On the days following Wiipurin Pamaus and the WiO Anniversary, a brunch is served at 12 PM. The hostesses prepare a delicious buffet that is perfect for easing a hangover. Staples of the brunch menu include meatballs, frankfurters, herring, gravlax, various salads, and Karelian pies.

The election meeting in November is the most important meeting of the year. This is where the following calendar year’s officers are chosen. Freshmen are also encouraged to pursue any interesting positions, of which there are many to pick from. More detailed descriptions of the positions can be found on our website in Finnish. The older members will also be happy to answer any questions. The meeting is overseen by WiO’s inspector, Professor Markku Löytönen. 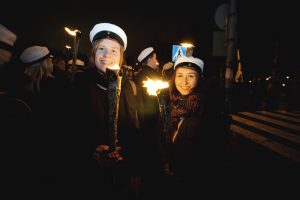 The Finnish Independence Day on 6 December

The university students’ traditional torch parade is a stunning sight. The parade makes their way from Hietaniemi Cemetery to the Senate Square through the dark December evening. Afterwards, mulled wine is served at Domus Gaudium.

At the Christmas party, the guests get to enjoy traditional Finnish Christmas treats such as rice porridge and pastries with prune jam. The freshmen are responsible for the night’s entertainment, but no worries; the crowd is easy to please once they get a couple of drinks in them. Santa Claus has also been known to drop by…

The application period for the scholarships granted by the WiO nation’s scholarship fund begins in January. Don’t forget to apply for your own! 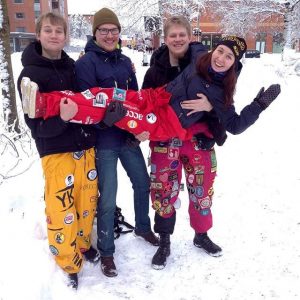 In February, it’s time to compete for the world championship of Finnish skittles. Each year at least one team from the WiO nation takes part in this light-hearted, but nonetheless exciting competition. Our nation has an active skittles club that practices around the year, and all members are welcome regardless of their previous experience (or lack thereof).

Christmas Party for the Hosts and Hostesses

The hosts and hostesses of WiO, KO and KyO celebrate Christmas with a slight delay around February or March.

The Appointment Party of New Curator and Officers

In January, the appointment of the nation’s new officers is celebrated at a fun dinner party. A new curator is appointed every other year, in which case their appointment is also celebrated.

The nation offers its members housing in apartments located in various parts of Helsinki, most prominently Mäkelänrinne. The application period is in February and March. 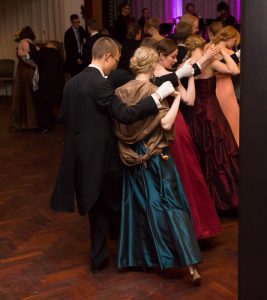 Wiipurilainen Osakunta is the oldest Finnish-speaking student nation in the University of Helsinki. It was founded on 5 March, 1653, and the anniversary party is held on the weekend closest to the date. The anniversary is celebrated in formal wear, with speeches, dancing, singing, and good food. The scholarships of the nation’s scholarship fund are always handed out at the anniversary party. The celebrations are followed by an after-party, and a brunch is served the next day.

This huge party for all student nations is organized by Osakuntalainen Unioni and usually takes place in late spring. It’s got everything you could possibly want from a party – be there or be square!

Same as the dinner party for women that took place in the fall, only with the roles reversed. Examples of themes from years gone by include “Wiipuri Open Air Festival”, “Roman Evening”, “America” and “Jailhouse Party”. 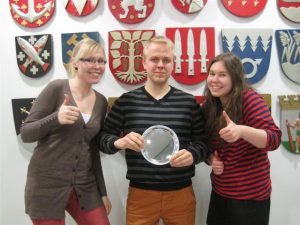 Do you have a way with words? Are you skilled at quickly coming up with well-thought-out opinions and backing them up? Every spring, the student nations of Domus Gaudium engage in a fierce debate competition. In addition to fame and glory, the winning team gets their names etched into a trophy plate that circulates from victor to victor. Each nation is represented by a team of three members, and the competition is judged by inspectors from each nation. This exciting event also attracts a good crowd.

Seniores Wiburgenses is the association for alumni members of Wiipurilainen Osakunta. Once a year, the hosts and hostesses prepare a dinner for them. It’s an excellent opportunity to cook a three-course dinner in good company and see that old members still gravitate towards the nation years after graduating.

Party Before May Day

The members of WiO nation start their May Day (“vappu”) celebrations early with a casual gathering and sparkling wine, the traditional May Day beverage of choice.

May Day celebrations in Helsinki begin with a gathering at Market Square, where a student cap is placed on the statue of Havis Amanda as a part of an old student tradition. After she has her cap on, the students get to put on theirs. After the ceremony, everyone is free to proceed with their own celebrations.

Members of the nation meet up for the traditional May Day picnic on Ullanlinnanmäki. If you’re celebrating May Day in Helsinki, this is the place to be. 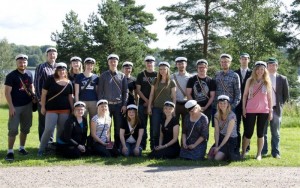 Each summer, WiO arranges a road trip to a South Karelian town, where they spend a weekend as the town’s guests. Typical activities on the trip include a skittles competition, sauna, and visits to various locations around town.