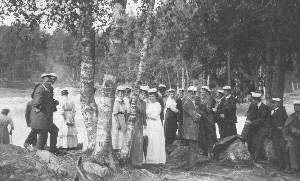 Wiipurilainen Osakunta is regarded to have been born in 1653, when professor Martti Stodius was named inspehtori and tasked with monitoring the behaviour of students. His area of responsibility included the Wiburgenses, the name by which all university students from Eastern Finland were known for a long time.

The biggest name among the Wiipurilainen Osakunta during the Turku Academy time (when the University that would become Helsinki University was based in Turku) is probably Matthias Colonius, who joined the osakunta as a 19-year-old in 1757. He collated a register of every Eastern Finnish student who had studied at the University up to this point, was osakunta kuraattori for 20 years and, as a law professor, osakunta inspehtori from 1779-1814. He acted also as the first procurator of the Finnish Grand Duchy, a position that corresponds to the attorney general today.

The most notable members of the osakunta during the Turku period also included Adolf Ivar Arwidsson, and Gabriel Rein, who later as kuraattori guided the Osakunta in its move to Helsinki.

Wiipurilainen Osakunta’s operation was not hampered by the fact that the large majority of its home regions belonged to so-called ‘Old Finland’ (Vanha Suomi), areas gained by Russia from Sweden via the Treaty of Nystad and the Treaty of Åbo. At the beginning of 1812, Old Finland was joined to the Finnish Grand Duchy. Wiipurilainen  Osakunta decided to celebrate this momentous event by setting their official anniversary day to coincide with the meeting date of the committee who organised the merger on 5th March.

In 1819, Wiipurilainen Osakunta’s territory was declared to include, in addition to the Viipuri county, the majority of the Finnish regions of Savo and North Karelia. At the same time, the osakunta welcomed students from Ingria and other areas of Russia and the Baltics.

Upon moving to Helsinki, it was decided that the larger osakunnat would be subdivided to make supervision of students easier. As a result, the Savo-Karjalainen Osakunta broke off from the Wiipurilainen Osakunta in 1833. Later, Swedish-speaking members broke off to form the Östra Finlands Nation, and members from the Finnish region of Kymenlaakso to form Kymeenlaakson Osakunta.

Neighbouring osakunnat attempted to reduce the territory of Wiipurilainen Osakunta several times. However, the biggest piece was taken by the Soviet Union during the Second World War, as a result of which the main students joining the osakunta come from the small present day region of Southern Karelia from Lappeenranta to Parikkala, as well as those from Karelian families moved to different parts of Finland.

The entire institution of osakunnat, to which all non-noble students had to belong, was considered a danger to the state and thus dissolved in 1853. Wiipurilainen Osakunta continued to operate as an unofficial peer group, until it was legalised again in 1856. It was during this unofficial period that the tradition of celebrating in commemoration of the Viipuri explosion (Viipurin Pamaus) was established.

At the end of the 1800s, Wiipurilainen Osakunta began to focus strongly on work in the south-eastern Finnish region. WiO members were very active in collection of ethnographic material, with almost half of the materials in the student ethnological museum (Ylioppilaiden kansatieteellisen museo, collection now part of the National Museum of Finland) obtained by Wiipurilainen Osakunta. The pioneer of this museum project was Osakunta kuraattori Theodor Schvindt. Another project involved adult/folk education work. Wiipurilainen Osakunta organised balls raising funds for the Kanneljärvi (Uusikirkko) school. For these events, WiO commissioned music from the young composer Jean Sibelius. Jac Ahrenberg acted as the main organiser, while young member Eliel Saarinen was also part of the organisational committee.

In the 20th century, Wiipurilainen Osakunta continued its work in the south-eastern Finnish region. Kaukomieli operated as its own publication series from 1876 (its most recent publication was in 2003). Many WiO members were also active members of the Academic Karelia society (Akateeminen Karjala-Seura, a Finnish nationalistic activist organisation founded by academics and students and active from 1922-1944). Following World War II, Wiipurilainen Osakunta asserted an image for itself through cultural work. WiO kuraattori Leo Sario established student culture competitions. The osakunta’s own choir had already been founded in 1930, but now also actors, singers and other artists increased the cultural contribution made by Wiipurilainen Osakunta.

Wiipurilainen Osakunta met originally at the University or, for example, at the home of the inspehtori. However, the Osakunta is known to have had rooms already during the Turku period, as the osakunta library has space to accumulate. In Helsinki, WiO was also able to use or rent rooms in different parts of the city until the student building (ylioppilastalo) was completed in 1870. From there, WiO moved to the rooms designed for them in Osakuntatalo (later known as Uusi ylioppilastalo) in 1911. They had to leave these rooms in 1972, and at this point WiO moved to Liisankatu.

Study and collection trips at the end of the 19th Century

In the spring of 1874, a new kuraattori was elected to the Wiipurilainen Osakunta. The election was won by Ostrobothnian docent, Doctor of Philosophy Otto Donner. Although Donner was a docent of Sanskrit and comparative linguistics, he had also published studies in the field of Finno-Ugric linguistics and discussed, among other things, the riddle of the Sampo (a magical device from Finnish mythology). Otto Donner began as kuraattori of Wiipurilainen Osakunta on 26 September 1874, and already at the weekly meeting of the following week, 2 October 1874, he initiated the inception of the osakunta’s ethnographic collection.

According to Donner, through collection and exhibition of objects from one’s home region, people’s knowledge of Finnish folk culture and cultural heritage could be increased. Donner proposed that University Osakunnat should engage in similar practices: “Our osakunta in particular has work to do, as it would surely find the richest and most interesting material in its home region” (translated from Finnish by Sonja Repetti). The idea was that each student would collect cultural objects from their own area. Ethnographic work was believed to create a connecting bridge between a region’s people and its researchers. Collecting objects was seen to benefit both parties by increasing students’ contacts with the common people. The intention from the beginning was to collect a comprehensive Karelian folklore collection, a museum. The first items for the Wiipurilainen Osakunta collection were received already by the next Christmas holiday, including a woman’s dress from the area near parishes of Antrea, Räisälä and Jääski.

Wiipurilainen Osakunta also encouraged other osakunnat to perform similar work in their home regions. This idea was positively received, and it was decided that each osakunta would organise a display showing an interior typical of its region, with mannequins dressed in traditional regional dress. The students’ ethnographic exhibition received much praise at the art and home industry exhibition held in the summer of 1876. Following the exhibition, a joint osakunta committee created and distributed a pamphlet in which an intention was announced to establish a ‘general national museum’ (“yleinen kansallis-museo”). Therefore, the collection and preservation of clothes, furniture and all kinds of objects that shed light on life and customs of Finnish regions was seen as imperative. Osakunta summer trips are thus connected to the birth of the Finnish Museum. The first Finnish museum with an extensive collection was established from Osakunta collections. This was the Ylioppilaiden kansatieteellisen museo, whose collections were donated to the state in 1894 for the establishment of the National Museum of Finland. Several of the students who participated in osakunta artefact collections later obtained important positions in the research and development of Finnish ethnology, with many also working in museums.

Study of the home region of Karelia had clear academic goals. During home region trips, folk poetry and instruments were collected, and the folk culture of the region was photographed and recorded. At the same time, this was patriotic-nationalistic work performed with the aim of supporting the nation and home region, allowing members to connect with common people of the region and to appreciate the value of their own past. The rise of ‘Karelianism’ also had a background effect. Karelianism was a cultural phenomenon strongly associated with a national-romantic art movement, which took its themes from Karelian epics. At the same time, recording of folk poetry began to be practised more extensively and comprehensively, especially in the Karelian region. The people of Karelia were considered to represent a ‘best preserved, admirable Finnish past’. Wiipurilainen Osakunta was notably the most active osakunta in collecting artefacts.

At the Wiipurilainen Osakunta anniversary ball on 5th March 1891, kuraattori Theodor Schvindt emphasised in his speech ‘to the home region’ that particularly in the Wiipurilainen Osakunta home region had original Finnishness been preserved more more distinctly than in the rest of Finland, both materially and intellectually, making this area an ethnologist’s dream. Hiking in the area of Viipuri county, Wiipurilainen Osakunta students were looking for a way of life that they believed had been preserved as authentically as possible. By collecting artefacts, the explorers aimed to highlight a culture they realised was already disappearing.

Wiipurilainen Osakunta has continued its tradition of summer trips to the present day, although in recent years a summer trip to one of the towns in the home region mainly involves getting to know the area and enjoyable summer holiday activities. Last summer [2001], the summer trip was organised to Savitaipale. In the spring of 1987, the idea of re-starting the home region research trips that were part of osakunta operations two decades prior was raised. In April 1988, the osakunta research expedition made a joint research trip with the municipality of Ruokolahti, with the aim of producing a general brochure about Ruokolahti’s church hill. The committee first got to know their topic in Helsinki, before making a trip to Ruokolahti to supplement the information about Ruokolahti mapped in Helsinki. The end result of the trip was a brochure presenting the Ruokolahti church hill in four languages. Perhaps a similar activity could be planned in the osakunta activity program in the coming years as well.